The Christmas tree has a long tradition in dating back to at least the 16th century. Many individuals brought large trees into their houses and decorated them with candles and fruit.

In North America, the Christmas tree tradition originates in . On Christmas Eve in 1781, a party with German and British officers took place with the main attraction of the evening being the fir tree in the corner of the dining room. The tree was lit with candles and decorated with fruit by Baroness von Riedesel, wife of German officer General Fredrick von Riedesel. Riedesel served in the Seven Years War and led soldiers from the Duchy of Brunswick during the American War of Independence, commanding German soldiers in the Saratoga Campaign.

The Christmas tree tradition added to the festive nature of Christmas activities that were celebrated in the predominantly Catholic Lower Canada (). However, in the largely protestant (), Christmas was not as big of a holiday as in . One English immigrant to Upper Canada in the 1820s observed: “I was much surprised at the cold indifference which most people showed in their observance of Christmas day – with the exception of the then few residing English families, the church was scantily attended.”

If you want to see what Christmas was like in the 19th century, you can head to the and Museum on November 30 for their ‘Preparing for the Holidays’ event. Click here to find out more and to find out more about some other upcoming Christmas activities.
Posted by Niagara 1812 Legacy Council at 3:09 PM No comments:

When the War of 1812 was declared both the British and the Americans lacked ships on the . Both sides quickly began building warships and converting civilian vessels. One vessel that was converted by the Americans was the USS Trippe.
Originally named the Contractor, the USS Trippe was purchased by the navy and converted into a sloop with a 32-pound long gun in 1812. By 1813 the Trippe was in and part of Commodore Oliver Hazard Perry’s squadron. During the Battle of Lake Erie in September 1813, the Trippe engaged in a long range duel with two small British ships. The Americans took control of Lake Erie after the battle and the USS Trippe was relegated to transporting supplies.
In October 1813, the Trippe returned to Buffalo as the navigation season came to an end. On December 30th the ship was burned during the British attack on Buffalo. The story of the USS Trippe doesn’t end in 1813.
The Buffalo Maritime Center is now working on building a replica of the USS Trippe from the War of 1812. The center received a replica hull that will be used to rebuild the Trippe and many other donations have come in to help move this project forward. If you are interested in learning more or helping with this project, you can contact the Buffalo Maritime Center by clicking here.
Posted by Niagara 1812 Legacy Council at 3:07 PM No comments:

A vote for war

On June 18, 1812 the declared war on the or and and her dependencies. This decision was not taken lightly by the and compared to other declarations of war the vote for the War of 1812 was close.

In the House of Representatives, the vote was 79-49 and in the Senate, 19-13. This means that only 61 percent of members supported the declaration for war. The vote was primarily based on party lines with 81 percent (98 out of 121) Republicans voting for war. On the other hand, 100 percent (39 out of 39) Federalists voted against the war. 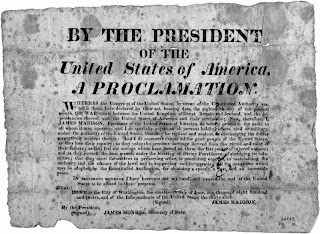 The vote based on party lines also reflected regional lines. Members from , the South and the West voted 80 percent in favour of war. Conversely, 67 percent of member from , and voted against the war.  The dissatisfaction with the war in the northern states became apparent rather quickly once war broke out with many areas continuing to trade illegally with the British in . Further dissatisfaction eventually manifested with the Hartford Convention in 1814 where northern states met to discuss their grievances stemming from the War of 1812.

If you want to find out more about the American perspective during the War of 1812, you can head to the Courthouse in Niagara-on-the-Lake for the Bicentennial Symposium where the principal speaker will be Dr. Don Hickey. The symposium takes place on Sunday, November 17 from 1 to 4 p.m. Click here to find out more.
Posted by Niagara 1812 Legacy Council at 3:08 PM 1 comment:

Email ThisBlogThis!Share to TwitterShare to FacebookShare to Pinterest
Labels: declaration of war, War of 1812

Joseph Willcocks emigrated from in 1800 and when he arrived in , he served as the sheriff of the Home District of Upper Canada from 1803-1807. In 1808, Willcocks began serving as a member of the Upper Canada Legislative Assembly. During his time in the legislature, he made a name for himself as a critic of British policies.

With the outbreak of war, Willcocks initially supported the British by helping to secure Iroquois support, recruiting men for the militia and even fighting at the Battle of Queenston Heights on October 13, 1812. Despite initially helping the British, Willcocks switched his allegiance when the Americans invaded the in May 1813. By July 1813 Joseph Willcocks, joined by Banajah Mallory and Abraham Markle who were both former members of the Upper Canada Legislative Assembly, created the Canadian Volunteers. This group of militiamen served as scouts for the Americans and spoke to the loyalty of various citizens. 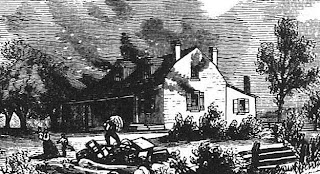 For his actions, Willcocks was charged with high treason in absentia in the spring of 1814 during the Bloody Assize trials in Ancaster. Willcocks managed to escape the hangman’s noose, but he did not go on to live a prosperous life. In September 1814 during a skirmish around Fort Erie Willcocks was shot and killed. After his death, the Canadian Volunteers melted away as an influential force and they were disbanded in 1815 after their numbers fell and the government denied further recruiting funds.

On November 7, you can head to the for “In the Grip of the Eagle.” The event combines dinner, period music and a light-hearted military tribunal to address those subjects who are resistant to American occupation. Click here for more details and don’t forget to mark your calendars for the Flames Across the Niagara event happening on December 6 and 7. Click here to find out more about that event.
Posted by Niagara 1812 Legacy Council at 3:06 PM No comments: